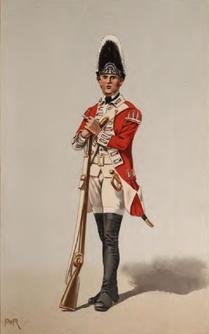 British Grenadier, Wikimedia Commons
​       British politicians debated whether they should primarily use the British Army or the Navy to crush the American rebels. They chose the army, which consisted of nearly 50,000 troops. Over the several years of the Revolution, probably about 100,000 troops served for the British. Within the forces that initially arrived, about 40,000 were infantry and 10,000 consisted of cavalry and artillery.
The British soldiers came from diverse backgrounds. Throughout the British Army, there was a strong sense of ranking and titles associated with aristocracy. Officers could climb in rank through wealth and money, even if they were perhaps not the best qualified. Still, some military leaders came from the working class.  Many of the common soldiers were from lower rungs of society; some were even convicted criminals. Soldiers came not only from Britain, but were also mercenaries from Ireland and German states such as Hesse-Cassel.
British officers’ relations with their troops were somewhat less harsh than the typical stereotype. Rewards for actions occurred more frequently than punishments. Although the British Army employed very stringent punishments such as flogging, these were used only occasionally. British military commanders would often explain their commands and not simply issue them. In addition, officers often had sympathy for the soldiers and became like fathers to their troops.
This sentiment between British troops and officers stood in stark contrast to the opinions that most British officers had of the Continental forces.  They viewed the Americans as very unprofessional and unorganized. When the Americans would avoid directly confronting the British forces, such as through guerrilla warfare tactics, the British viewed it as a weakness. Such low opinions of the Continental Army are not surprising, as the Americans in a sense were outsiders, not part of the long history of European warfare. The British thought so little of the Continental Army that when they surrendered, they would have preferred to surrender to the French Army rather than to the Continental forces.
During the war the British had to change their fighting tactics to cope with the Continental Army. Before the Battle of Bunker Hill, the British troops had mainly engaged in battles through full direct attacks. At Bunker Hill, the British learned that this strategy resulted in too many losses and was inefficient against the American tactics and landscape. Later, the British commanders would develop the skill of flanking maneuvers. These were movements of troops in such a way that would surprise the Continental forces. General  Howe would often carry out battles with flanking maneuvers to minimize casualties, since he knew not many new soldiers from Britain would be available.
One topic concerning the British Army that has caused much debate is the question of why they lost. One problem for the British was that the officers overestimated support of the colonists. The British officers, at first, were counting on a lot of support within the colonies. However, many of the colonial authority structures that had existed during the war crumbled, since most colonists were against the British. Even support from Loyalists would dwindle as the British frequently destroyed the property of colonists.
Another key reason for the loss was the fact that the fighting was not in Europe. The British Army had difficulty concentrating on one region as America expanded over so much land. Furthermore, unlike European countries, America did not have an official capital that could be seized and thus end the war. Even though Howe captured Philadelphia, he had not taken over the Continental Army. An additional difficulty was  bringing supplies from Britain to the colonies. As the British forces were often very mobile in the Americas, delivering their supplies to them was difficult. By the end, France’s involvement in the war would overwhelm the British and shift Britain’s focus, as the war was no longer confined to the colonies.
Britain may have been diverted by global conflict with other colonies and powers like France and Spain, but they still remained in the war. However, near the end of the war the British shifted more of their attention to their Southern colonies. This was partly because they were motivated to preserve the Caribbean Islands, which provided a lot of money through the sugar plantations and the slave trade. As the years progressed, Britain would grow increasingly anxious, trying to juggle all of its colonies around the globe. Ultimately, the British Empire would collapse with the loss of the British army in the American Revolution.

The British army would typically have three lines of men, one of which was for backup. Each line would have about four brigades (consisting of a couple thousand troops) making a total line of about 8,000 troops. Each brigade usually consisted of four regiments. A British regiment (consisting of 500 troops) would be equally divided into about ten companies (of about 50 troops each), as seen below. Each of these companies would then be led by various officers. Regiments were divided according to the function of the troops or the title of officers. In the British army, there was flexibility in the leadership. For instance, the major, colonel, and lieutenant-colonel could also have positions over larger groups of soldiers than a company. Some office duties, such as the brigadier general were temporary. There are several other military units in the British army such as battalions and divisions.